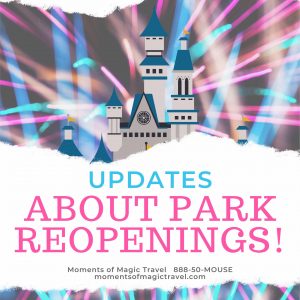 On Monday May 4th, the Guidelines for Reopening Business Working Group of the Orange County Economic Recovery Task Force met via a Webex Virtual meeting to continue  their ongoing discussions, announcements, and statements regarding the impact of COVID-19 on Central Florida’s economy.

Chuck Whittall, Co-Chair of the group turned to representatives of both Walt Disney World and Universal Orlando and asked them to weigh in on when they thought they would “return to some percentage of opening” and thus see the theme parks reopen again.

Thomas Mazloum, Senior Vice President of Resort & Transportation Operations at Walt Disney World Resort  responded, “We do not have any opening date yet. Some of you may know we at this point were taking bookings that were in June, that doesn’t mean that we are opening in June. At this time I just want to make it clear that we do not have any plans to share about Walt Disney World or for that matter any of our other parks at this point. Clearly regulatory guidance is an important element of this in each area and country where we work and at this point I just want to be clear that we simply don’t have any plans to share about Walt Disney World yet.”

When asked about speculation of waiting until January 1 to reopen, Mr. Whittall asked if it would be in the near future vs longer future before the parks would open, Mr. Mazloum stated that at this point there was nothing he would share publicly about Walt Disney World.

In a similar response, Rich Costales, Executive VP, Resort Operations at Universal Orlando Resort shared, “We did announce that we would be closed through May 31st and really we haven’t made a decision as to when exactly we would open back our theme parks, and really can’t do that until we hear what government and health officials recommend and how this phasing will eventually roll out, so we likewise are kind of in limbo right now and we really certainly are hoping to see the statistics that we see on a daily basis get better and better but to speculate anything past what we have announced as a closing date of May 31st  wouldn’t be appropriate.”

Mr. Whittall also commented that he hopes to see the parks open sooner rather than later as the parks are central to the survival of the local economy.

Moments of Magic Travel is committed to providing up-to-date, accurate information regarding the travel industry and Disney Theme Parks, and will continue to monitor and evaluate the effects of COVID-19. Please stay tuned for more details and let us be your reliable source for expert Disney travel plans and all Disney travel information and updates.

Enter your email and stay on top of the Magic!